I really should have done this review first, as the other BKYA reviews don't make sense without this one. Also, Regular Arnie, or just Arnie, is the original so it should have gone first. Let's start by taking a look at it in it's most common variety, the Can: 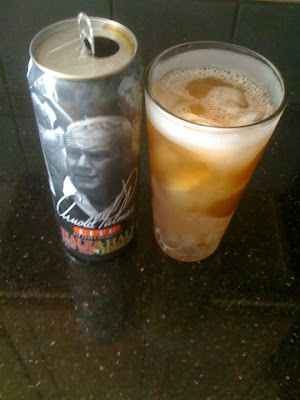 I looked for the oldest photo in my phone of an Arnie, that photo above I took over 3 years ago. That's how long I've been taking photos of beverages for no reason. The best thing about the Can is it says it's price, $0.99, on the can. So places that sell it can't mark it up. The Can is 24 ounces, so only $0.99 is a great deal, especially compared to a Snapple which is usually around $1.80.

The other size varieties you should know about are what I call Giant Arnie and Re-closable Arnie. Here they are: 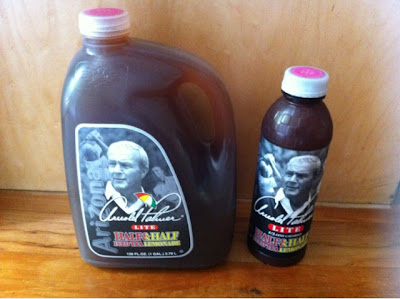 OK, that's my review of Regular Arnie. I score it a 90 just so that there's room for a better tasting beverage.

Time for the imaginary questions:

Hey, Jeff, this sounds delicious, but what made you blog about this stuff?
Hi, thanks for the question, imaginary person. When I first tried Arnie, it was pretty rare. So I started looking for it at different beverage retailers and whenever I would find it I would remember said beverage retailer. Then a weird thing started to happen. I started to notice lots of people, mostly teenagers, walking around with Arnies. Then it started to appear in more stores. Then I began to think, "Hey Jeff, you should start a website showing where you can buy an Arnie and the different varieties and stuff." But that seemed like a lot of work. Then it started to appear everywhere, so that website would have been useless. Then I created this dumb blog and decided to review Arnies even though no one is interested, and here we are.

If you don't answer this next question correctly, I will kill your dog. Within 24 hours, when did you have your first Arnie?
Whoa, you got pretty hostile quickly. Luckily, Suzy is safe because I know it was April 8th, 2005 around 11am. I don't forget such memorable events. Actually I remember because I fittingly had my first Arnie in the state of Arizona. Heather went to Arizona for work, and I decided to tag along. On April 8th, 2005 she was busy working, so I decided to go golfing. I got paired up with two nice guys, we were having a good time golfing when the beverage cart pulled up. They both said "I'll have an Arnie". Not really knowing what that meant, I said "I'll have an Arnie too". Four holes later I bought another, and the rest is delicious beverage history. But the reason I remember the exact date is because two days later we were staying at a hotel on a fancy golf course. I was watching the Masters waiting for Heather to get ready so we could go play tennis. Then Tiger got in a bit of trouble. When Heather was ready we started walking to the tennis courts, when all of a sudden almost every bungalow nearby erupted in yelling and cheering. Because this just happened (skip to 1:25 for the actual shot):

So in order to save my dog, I looked up the date of that Masters.

You said Arnie is one of the five best golfers of all time, can you name your top five for me, pretty please?
You just threatened my dog, now you say "pretty please?" That's weird. But here's my list:
I probably have Arnie a little bit higher than most, but HE INVENTED COMBINING ICED TEA AND LEMONADE! Also, I should point out so you don't get the wrong impression, but I really hope Tiger doesn't win more majors than Jack and stays in the number two position. Because of the whole crashing-his-car-because-his-wife-attacked-him-with-a-golf-club-because-he-was-having-sex-with-anything-that-moves thing.

How can you possibly justify writing this much about a beverage?
There's no good answer to this question, but just trust me, the beverage is quite tasty.