I had to get to Manchester so I took the train. I splurged and got first class. First I want to say how awesome trains are here. They make Acela look like the Little Engine that Could. The trip is 200 miles. It had 4 stops and still only took 2 hours. Also, the cost is pretty good. First class was about $50. Acela first class to NY (roughly the same distance) is, what, $150?

Seats were reserved so I took my seat. Then across the table from me sat a roughly 50 year old guy. The first thing he did was pull a can of beer from his bag and start drinking it. It was 11am. He finished that one, then had another. Beer is free in first class so he had two more before the end of the train. Near the end he pulled out a tobacco tin that had a marijuana leaf decal on it and started rolling cigarettes. He seemed like a pro. It kept me entertained. 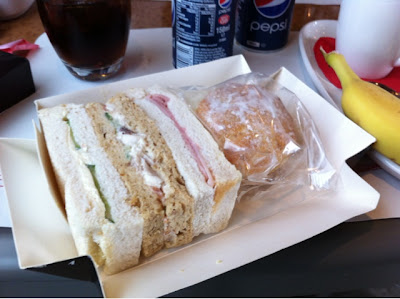 It was a trio of crappy English sandwiches. One was ham and cheese. Another was called chicken mayonnaise. The third was cream cheese and cucumbers. I guess not too bad for free.

I am writing this blog on the train back to London. There's only 15 minutes left and they haven't come around with food. I feel ripped off. I demand crappy sandwiches!