I rented a bike for my time in Manchester. If you look at the pictures you'll see I had a little surprise when I went to go return it this morning. Yup, someone stole my rear wheel.

I had two options, return the bike or just don't bother. They took £100 for a deposit so I would be out that much if I just left the bike. But I figured the wheel wouldn't cost close to that.

The bike shop guy first didn't believe it was quick release even though I had the axel. Then he started adding up the costs for all the parts and came up with £80. That is close to $130. I said that was ridiculous (he agreed) and to use the wholesale price. He did that and came up with £39. Still pricey I thought but I was ok with that. Then he said he had to call the boss. After that conversation they said it was £60. I said "Don't you think that's too much?" He said yes but nothing he could do. So the total cost was £77 with the rental price.

I "saved" £23 by returning it. Returning it took 45 minutes to walk there carrying the bike, dealing with the bike guys, then walking back. Carrying it, I also got grease on my shorts. In retrospect I wish I had just left the bike and I could have kept the lock, helmet and lights, and I would have clean shorts. 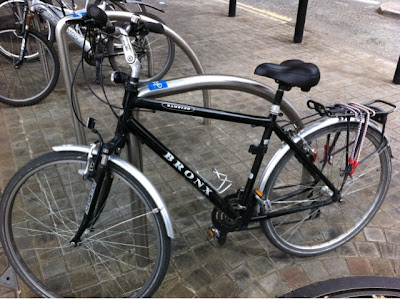 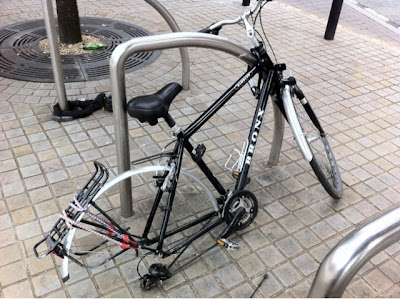