Well, I discovered this the other day: 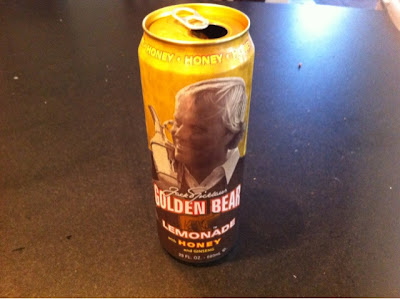 OK, I'm not too happy about this. I like Jack a lot, he won his last Masters when I was 10 and it was pretty cool I remember.

Also, he made this crazy putt at 70 years old with the Man right there watching:

If I made that putt I would throw my putter as far as I could, and quit golfing on the spot. Jack just sank it and moved on. So I don't want to say too much about this beverage. Because everything I have to say is not too good.

OK, a couple quick thoughts about it since I have this dumb blog:
I should stop since I just mentioned urine. One final story: I bought that can at Walgreen's. Here is how my conversation went with the register lady (if you picture me with 11 month old Connor in a stroller, it sets the scene better):

Lady: Oh, one Golden Beer! (she does double take) Hey, we don't sell beer here.
Me: Umh, it says Bear, like the Golden Bear, Jack Nicklaus.
Lady: What did you say? I thought it was beer, ha ha, it's not beer!
Me: Ha ha (this was a fake laugh), can I pay please?
Lady: I thought it was beer!
Me: Ha ha (this was the fakest laugh I have ever faked laugh), here's a dollar.
Lady: Oh, you're all set with your BEER, ha ha
Connor: Blurgh, da ma da fa

It tastes OK for weird lemonade, and that's the best I can say about it.

*Jeff's Score is a weighted score where Regular Arnie is a 90, Redneck Arnie is a 20, the one Skinny Arnie I had that tasted like metal is a 0
Posted by jeffster at 7:51 PM