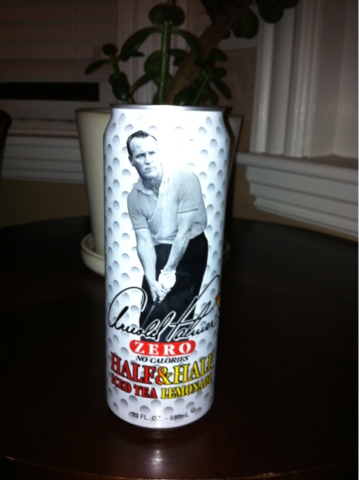 I had my first Skinny Arnie on February 11th 2008 at 11pm. No, I'm not some weird Arnie documenting savant. Or, I should say not that much of one. It's just that I remember it was immediately after I finally watched the BC Eagles win the Beanpot. It was probably my 5th Beanpot final, the previous 4 times they lost. The one year I didn't go, BC won. So I was convinced I was bad luck. They finally won, though not against BU. I had to wait two years for that treat.  I was all excited after the win, I decided to walk back to my place. It's about an hour walk from the Garden. I stopped to get a beverage when I spotted Skinny Arnie. I was so excited. It's a zero calorie Arnie! I took a sip and it tasted just horrible, like metal. One of the major disappointments in my life. Eventually I tried Skinny Arnie again and it wasn't as bad and didn't taste like metal, but still not good.

That's a long way of saying Skinny Arnie is really bad. I bought one yesterday just so I can get this post over with. This blog has now cost me $1. I think I will monetize it so I can get that money back. At my current rate of page views, I should get that $1 back in 12.3 years.

OK, my complaints about Skinny Arnie:

Jeff's Score*: 8
Varieties: The Can, Giant Arnie
Availability: high
Stores: most places that have AriZona products, though it depends on the stock. Also, that capital Z is really annoying me.


*Jeff's Score is a weighted score where Regular Arnie is a 90, Redneck Arnie is a 20, the one Skinny Arnie I had that tasted like metal is a 0
Posted by jeffster at 8:36 AM