Connor and I went to the Fenway open house the other day. It was madness. People were everywhere, lines were wihckad lahng. The people on the field looked like human cattle.

In contrast, Heather and I went to a Mother's Day open Fenway thingy a few years ago. We walked on the field and there were maybe 50 people on the whole field. It was fun, and we took a bunch of pics in the dugout. We walked up to a table and Mark Kotsay was there signing things. We got an autograph and I said "Hey, good luck this season Mark!". He was released a month later.

Anyway, Connor and I went to El Pelon. I decided to branch out and get tacos. I got the Americanos which I think means "awesome order".

It is two chicken tacos with lettuce, salsa, cheese and sour cream: a true awesome order. 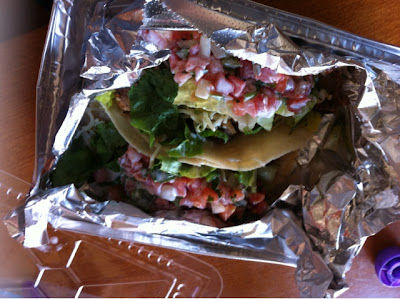