I like to think AriZona looks at regional sales, sees that around me sales are high, so they like to introduce new varieties for testing purposes. I say this because I haven't seen Peach Arnie since I bought it. Then I went to the grocery store and saw this: 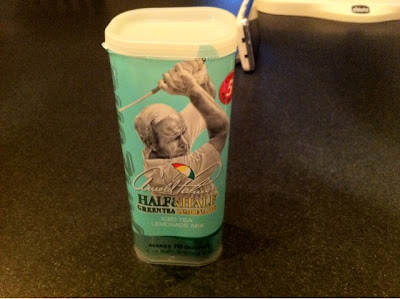 That's a canister of five packets of powder that make two quarts of Arnie for each packet. It is a powder version of Asian Arnie. However, it doesn't have the asian characters on it, so I declare it Green Pow Arnie. I've gone back after I bought it and haven't seen it since. So, there's a conspiracy is what I'm saying.

It was $4 for ten quarts of Green Pow Arnie. I thought it was pretty expensive since I have a bad sense of liquid volume. Here is one packet all mixed up and stuff and some poured into Lando: 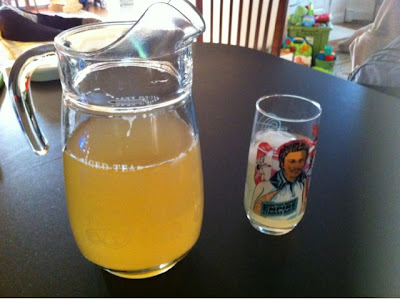 That's a lot of Arnie for less than a dollar.

The best thing about this stuff is there are only 40 calories in each packet, so 10 calories per serving. I didn't have high hopes for it. I thought it would taste like Skinny Arnie. I was very pleasantly surprised with the taste, it tastes nothing like Asian Arnie, so I was happy about my nickname change to differentiate them. Also, the wife likes it, so the score has to top 50.