Most people who know about this blog, and I think there are now over a dozen of you weirdos, are familiar with Anna's Taqueria. So I am not exposing some hidden jewel here. But what I am about to do is convince you that you have been ordering the wrong thing there. Here we go:

Remember when I said El Pelon Taqueria serves my favorite burrito? No, well see those blue words in the last sentence? Click on those. I was nice enough to make the link and all. Lots of people have said to me, "I'm surprised your favorite burrito isn't Anna's Taqueria." Lots of people are like Heather and some other person. I respond to these lots of people by shrugging. But now that I have a dumb blog I can expand on that shrug. 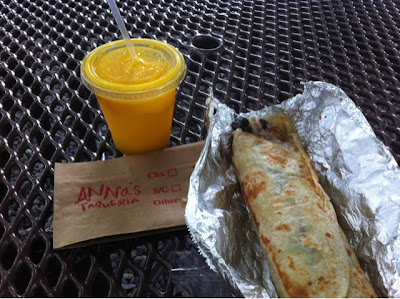 Yummy! So, yeah you know about quesadillas and stuff. Well the secret to creating this perfect Anna's entree is you have to ask for your preferred burrito ingredients. For me this means asking for both beans and rice. By default it just comes with beans and no rice. They sometimes say "that's $.15 extra" for the beans/rice, if that happens just nod or something. As I'll explain later, you can afford it. I get chicken, black beans, rice, lots of salsa, lettuce and hot sauce. Since it is a quesadilla, it has lots of gooey cheese inside and the outside has been grilled with some oil and it is nice and crispy. They usually have a tortilla already on the grill so they make it really fast, it will not slow you down.

Now to the cost. Check out the menu. A regular burrito (which is small and comes with no cheese) is $4.85. A super burrito (which is a little bigger, but comes with cheese) is $5.35. Those are great deals for delicious burritos. However, look at how much a quesadilla is. Well you don't have to look because I will tell you, it is $4.50. I'm not quite sure which size tortilla they use, but let's say it is the regular burrito size. The quesadilla costs $.35 less, and you also get all that cheese and oily tortilla crispiness. I like to think they are paying you to add cheese and crispiness. If they use the super burrito sized tortilla they are paying you $.85 for just a crispy, yummy tortilla. This is what I refer to as Anna's Burrito Arbitrage. This means you could potentially make money getting the quesadilla if there existed a burrito trading market, and there really should be.

So this all sounds good, and I think I've convinced you, but I need to point out that I don't get this very often when I go to Anna's.

But, Jeff you just typed a lot of good things, why don't you get it all the time?

Ugh, you again asking me questions. Don't you think I was going to explain why? Well I don't get it because I usually get Anna's to go and bring it home. The quesadillas you have to eat right away or you lose the crispiness and it gets a touch oily. So I only get the quesadilla when I eat there.  However, another benefit to eating there is I get their orange juice. It is a big cup of freshly squeezed oranges, and it is delicious. It is like $2 which is pretty cheap for squeezed oranges. If you add it all together, that meal pictured above was less than $7. Next time you go there, you're getting the quesadilla, aren't you?