I saw this new Arnie that has booze in it. I call it Alchie Arnie: 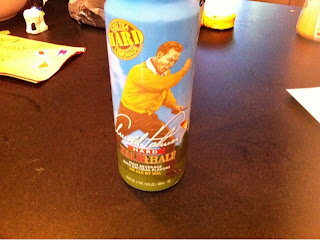 Other name options I considered were: the John Daly, or the Tiger Woods Getting-Ladies-In-the-Zone Beverage. Those aren't good, so let's just call it Alchie Arnie.

When I first saw this beverage, the first thing I thought was: that's an excited Arnie on the can, thrusting his fist, and "HARD"is in giant letters in his crotch. So I laughed since I'm 12. The second thing I thought was that it was going to taste bad. Like, really bad, I was positive. Generally any of these malt beverages are pretty bad, Four Loko excluded of course. Anyway, it was horrible. If you want an Arnie with alcohol, I would just take a regular Arnie and add some vodka to it. That tastes a lot better than Alchie Arnie.

Jeff's Score*: 10
Varieties: The Can and some weird glass jugAvailability: LowStores: Packies*Jeff's Score is a weighted score where Regular Arnie is a 90, Redneck Arnie is a 20, the one Skinny Arnie I had that tasted like metal is a 0
Posted by jeffster at 9:55 AM