I planned my trip to England at just about the very last minute. Exactly two weeks before I left, I bought my plane ticket, and also my ticket for the concert. I went to bed excited that night, then woke up and decided to check how their latest warmup concert went and saw this headline: "Stone Roses Split Up Again as Reni Walks Off in Amsterdam and Goes Home." That was not the best start of a morning. I then spent a good while trying to figure out what happened, and it seems like everyone overreacted. I figured to cancel the Manchester concerts would cost them a lot of money, so that wouldn't happen. Instead, for the next week I was completely worried about whether my ticket would arrive in time. I would practically accost the mailman asking if he had an international letter. Then a week before the concert, I got an email from the ticket people letting me know they are not shipping them overseas, so I can pick them up at the concert.

Biking to the park went well, even though it felt all wrong biking on the other side of the road. I did a quick lap around the concert area, scoped out the hospitality entrance, and decided I had some time so I biked around the rest of the park.

They weren't letting cars into the park, so it was pretty empty once inside. It was really nice, there were cow and/or sheep pastures: 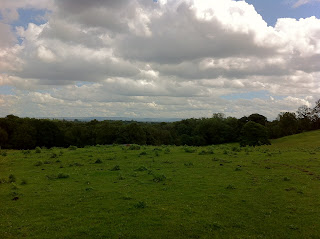 That scene was pretty close to the concert, no one was in sight, but you could hear the sound check. The gates I figured were open, so I parked my bike about one block away from the gate: 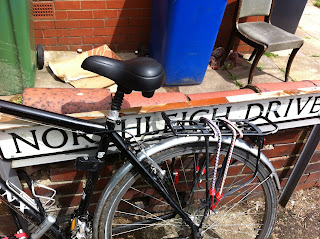 I then began an hour and a half odyssey to get my ticket. First I went to the hospitality window, and they said to head to the right to get my ticket. I started going that way, got to some other workers and asked them where to get tickets. They said "Oy, gov'nah, you want Gate 5, that's completely on the other side of the park."
"Are you sure, they just sent me over here? Is there anything else past here?"
"Oy, gov'nah, no there isn't, not sure why they would tell you that."
"Are you sure there's nothing down there?"
"Oy, gov'nah, there isn't."
I think you've figured out I shouldn't have listened to those guys. Because I spent the next hour being directed to different gates, then finally I wound up just past those first guys where I got my ticket: 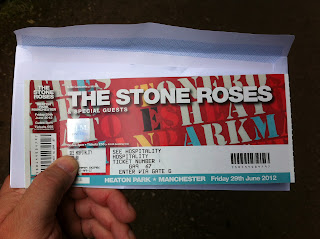 You cannot believe the amount of relief I felt when I was holding that ticket. Also, my thumb is strategically placed over the price so you can't see how much I paid. The only tickets left when I bought my ticket were for the hospitality package. It was pretty expensive, but as you will see, I think it was well worth it. I next biked to the nearest town and killed some time and ate some chips with curry sauce. After a little while, I went into the concert venue. The VIP package came with a t-shirt, a VIP necklace, and most importantly, four drink tokens, and two food tokens: 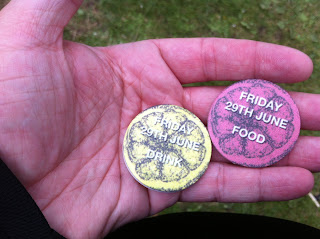 My hand is pretty wrinkly. I then went to the bar to get my first drink. The choices were very disappointing, Foster's, Heineken, or Strongbow Cider. When I did my semester in the UK, I was 20 years old so very excited by the fact I could buy booze legally. My friends and I acted like 16 year old British people, and would buy cider a lot because it was cheap. So I think of cider as the bottom of the barrel of alcoholic beverages. Well I guess Foster's and Heineken are lower since I got a cider: 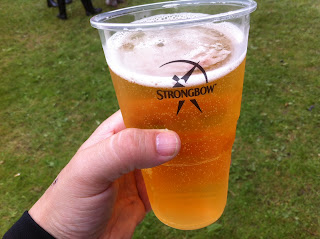 Imperial pints too! Don't they realize I have to bike home? The tokens came in this lovely little pouch: 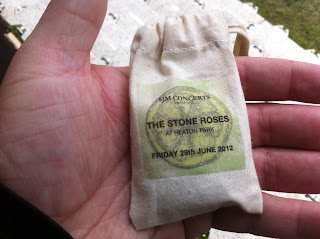 Alright, it was time to go check out the venue. I was greeted by this sexy sight: 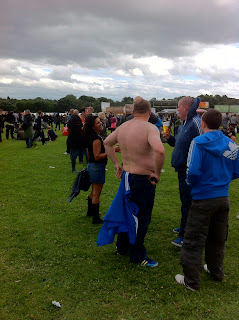 I should mention it was like 55 degrees and sometimes a little rainy. Here's a view of the stage: 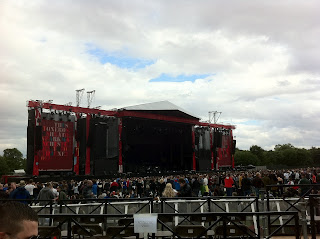 I then went to the farthest part of the park, and this was the view: 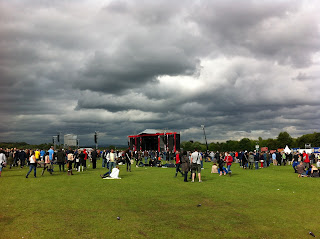 I then decided to check out the food options for the non-VIPs. 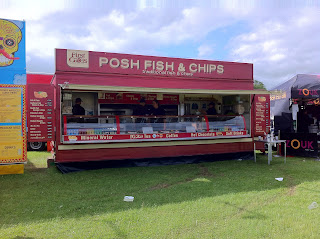 Oh, "posh" fish and chips. I'm sure they are fried in duck fat. Not to be outdone by this place though: 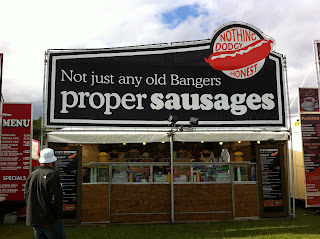 "Hey, we don't sell just your run-of-the-mill bangers. We sell proper sausages. Oh, you don't believe us, well what if I told you there's nothing dodgy! Honest!" 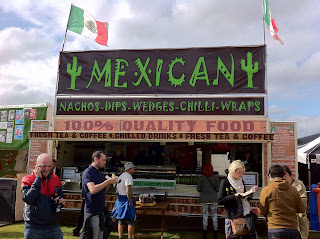 The sign would be better if it said 99.999% quality food just to keep you on your toes. Also, after giving it a lot of thought, I think "wedges" are quesadillas. This next one really interested me: 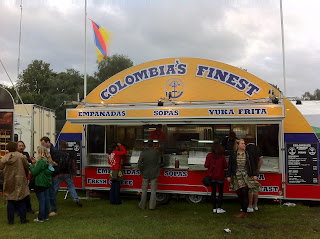 That picture was the busiest this place got. Later in the night, every food place had huge lines, but this poor place selling Columbia's finest had no lines. They should have had a sign that said "Hi, I'm an Empanada, you might know me as a turnover!" That joke is solely for Heather. Trust me, she's laughing right now. 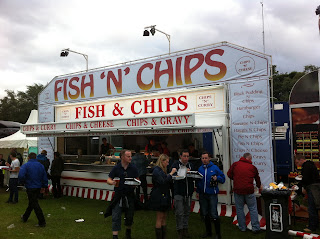 I don't know why I took that picture of the Fish 'N' Chips vendor. I imagine it was an awesome reason. 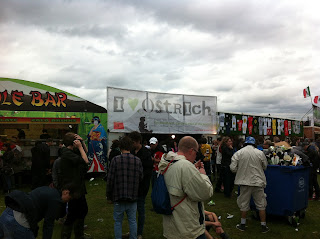 I was completely fascinated by the I heart ostrich vendor. Oh, we heart ostriches so much, we murder them, then serve them for you to eat. I also pictured being able to order a giant ostrich neck on a stick. I then walked by one of the bars for non-VIPs. Even early it was super busy: 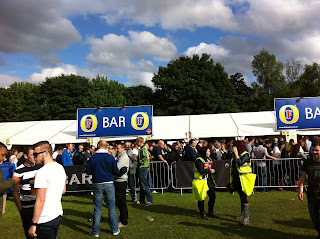 It's hard to tell but the line is like five rows winding around. Later, it was much worse. I imagine it would take at least an hour to get a beer. And this is just one of the four bars at the venue. I then went back to get my second drink. It took me one minute in the VIP area. I decided to pretend I was 20 again and got another cider. I was getting a little hungry so I checked out the menu: 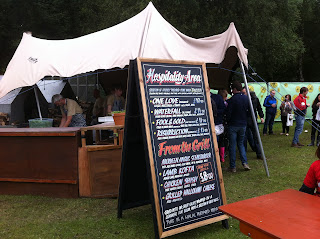 Oh, I see they named the food after Stone Roses songs. So I had to weigh deliciousness with my preference of songs. I went for the Fool's Gold: 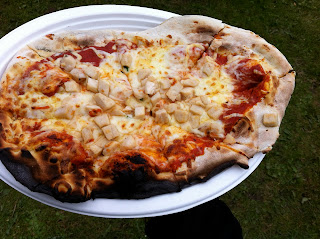 It was a cheese pizza with chicken basically. The picture doesn't do it justice, but that pizza was huge. Much bigger than a single person should eat. After eating it, I figured I wouldn't be hungry later and to just save my other food token as a souvenir. The pizza was really big is what I am saying.

OK, back to the concert. I went out there and the Wailers started playing: 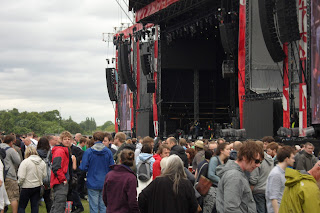 As in Bob Marley and the Wailers. I was kind of hoping for a Bob Marley hologram, a la the Tupac hologram. But it was some guy. (I know if you are really into reggae you will be mad and say "'Some guy!' That's Koolant Brown!" [I looked up the guy's name] To this I say "Sorry, and I wish I had heard of him before my son's birth because Koolant is an awesome name.") As the Wailers played, I detected an increase in a certain smokey aroma. I assume it was just grilled ostrich.

I then checked out the port-a-potties for non-VIPs. The lines were crazy long, people gave up and just starting relieving themselves on the boundary fence: 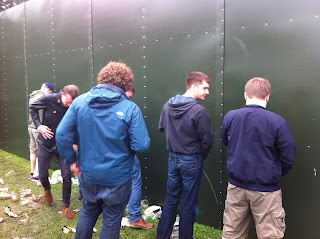 Whenever I had to use the facilities, I walked into the VIP area, went into some really nice giant bathroom trailers and waited an average of 1.2 seconds. At this time, I went to use the facilities, and got a third Strongbow. I promised myself I would get a beer, not cider, for the fourth token. Because I'm 36, not 20.

The Stone Roses played three shows at this park. Besides being the first show, I wanted to go to Friday's show because another band I like a lot, Primal Scream, was opening for them. I decided to get as close as I could when Primal Scream came on. The area closest to the stage they limited the amount of people who could access it. In my wanderings, I noticed everyone was amassed in the center and left, almost all the way back to the pissing fence. But on the right, there weren't that many people. So that's where I headed: 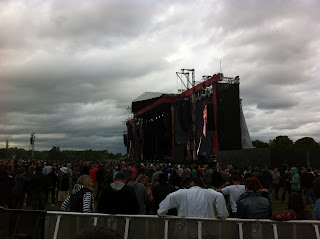 The photos make it seem like it's really far away, but I could see everything on the stage. That is where I later watched the Stone Roses.

When I would talk to people about my trip they would inevitably ask me "So, you're going to a concert by yourself?" I would say "Durr, that's what I just said, loser." What I knew was that British people are super friendly. Also, I'm pretty good at talking to Brits, so I thought I would make some new friends. I was standing watching Primal Scream for about 5 minutes when I met a guy named Phil. Phil was amazed I came all the way from America. He then introduced me to his friends. When I told them I biked to the concert, they all went nuts. I showed them the key to my bike lock and they were all amazed. Here's me and Phil's brother (I forgot his name): 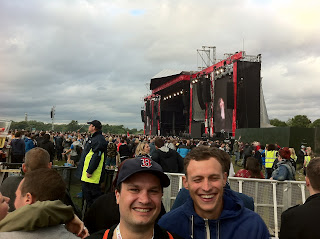 We had a good time, and had plans to hang out after the concert except we got separated during the concert because of the mass of people.

After Primal Scream, I went to go get my fourth drink. The lines in the VIP area were pretty bad. It took me forever to get the attention of someone. I finally did and he only had a Strongbow ready. So, unbelievably to me, I had four ciders with my tokens. I went back to where Phil and his mates were, they had saved me a space. Shortly before the Roses came on I noticed a bunch of helicopters: 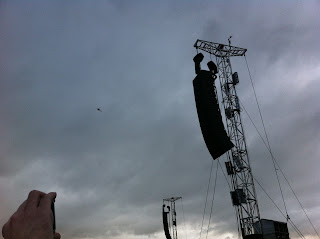 Then the Roses came on. Here's a crappy photo of them: 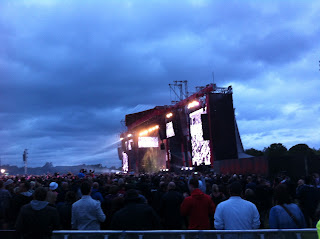 Here's a review of the concert.  Here's the setlist if you are interested:

Do you want my thoughts? Well, here's some frigging bullet points: 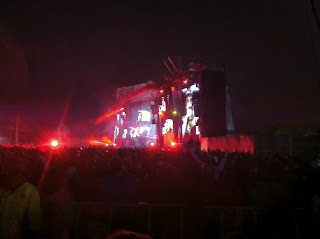 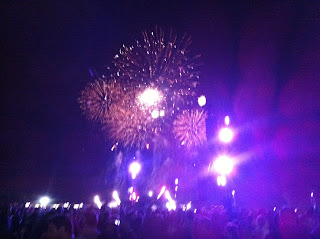 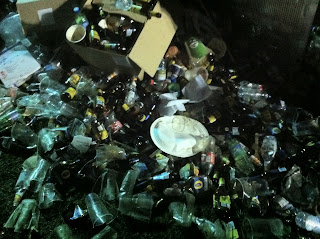 OK, no more bullet points. I made my way out and figured I would be on my bike and back at the hotel quickly. I went to go down the street towards my bike, but there were four policemen wearing almost full riot gear telling me I couldn't go down the street. I then spent 20 minutes walking around this pointless barricade to my bike.

I then biked for a while when all of a sudden I hit a horde of people taking up a whole street and walking towards Manchester. Imagine if you encountered a horde of zombies, except instead of being undead they were just drunk British people. I had to wind my way through these drunken British zombies for a few blocks. Here's a collection of things yelled at me (yay! more bullet points!):

Bradley Wiggins is a British cyclist who is currently wearing the yellow jersey as the leader of the Tour de France.

Anyway, I got back to the hotel before any of those drunken zombies got home. And that's it.
Posted by jeffster at 1:46 PM