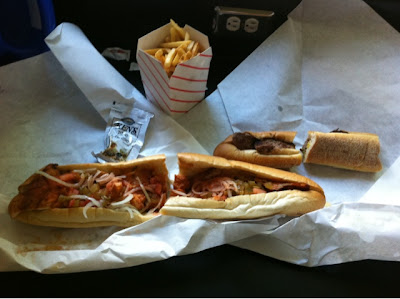 Are you guys amazed at how awesome that photo is? I will just assume your answer is yes. So to placate your need for more crappy food photos, I have another angle: 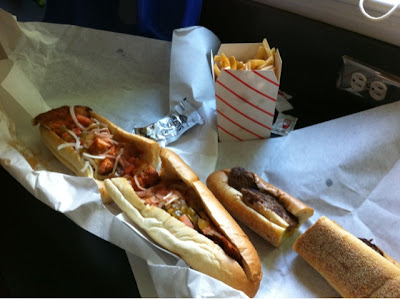 Food! That is a small hamburger sub with onions and mustard. The hamburger sub is for my mother-in-law. Are the condiments MO or OM? I'll go with MO.

I also got a large Buffalo Chicken Cutlet sub with LTPO and blue cheese. LTPOBC? That's a shitty acronym. Let's go with BOLT PC, that's better. Combine it with the other one and we have BOLT COMP. Woah, that's actual words.

What else is in the photos? Oh that's just a giant order of fries.

Anyway, I got a crap load of food with BOLT COMP and fries for $20.
I guess I should end this blog soon. Oh, to end the blog really randomly, and to celebrate my favorite Olympics ever, here is the best photo from the Olympics:
In the photo are all of the Stone Roses, three British gold medalists, oh and the guitarists for Led Zeppelin and the Clash. First, I love that in a group including five famous musicians, soon-to-be-Sir Wiggins, a guy that rides a bike for a living, looks the coolest. Second, if you told me to pick nine British people to hang out with,that photo would basically be the photo from that evening. I guess in this imaginary scenario you created (you jerk), I'm taking the photo since I'm not in it.