Heather, Connor and I went to Amherst to visit my sister on an overnight trip. She is going to be a senior in college at UMass. You might think that seems young for being my sister (since I'm so old, thanks, jerk), but thinking back when I was 15, and poking her soft head when she was an infant, to me she seems all growns up and I miss those head poking days.
Anyway, Connor mostly slept on the way and we got to Amherst. The first place we went to was Bueno Y Sano. Here's what Heather got: 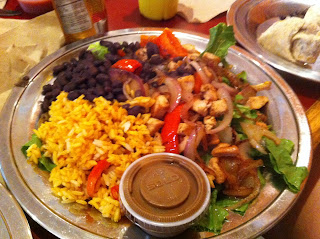 She got the chicken salad, which is more of a burrito without the tortilla than a salad. For some reason, I didn't take a picture of my burrito. But lucky for you, before this blog even existed, I was still taking photos of food for my leisure. Last year we went to Burlington and ate at the Bueno Y Sano there. I took a picture of my burrito and Heather got the same "salad" so here's our food:

It was all very good. After that, we went to our hotel and walked around. We stumbled upon your classic horse-eating-an-ice-cream-cone-while-a-caterpillar-attacks-an-eagle scene: 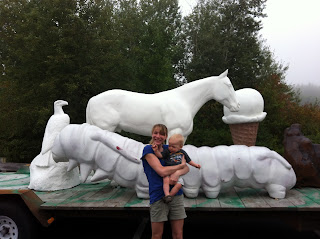 I decided to look overly serious in my photo, to respect the scene behind me. Connor also decided to be serious: 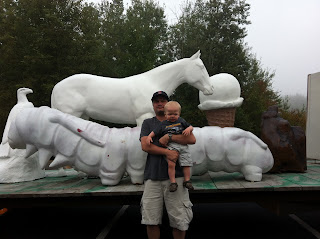 Should I explain this awesome scene? I would prefer not to and let it speak for itself. ART!??!?? Instead, here's Connor walking around: 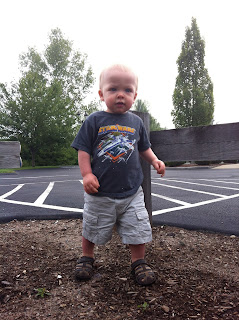 For dinner we went to Moti in Amherst. I got the Chicken Doner Wrap (of course you would have known that would be my order if you read my England: England post.) Here's the photo of my dinner: 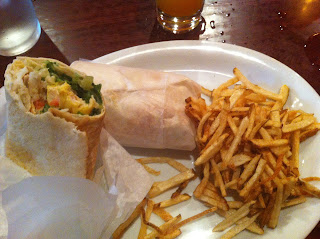 I substituted potato strips instead of hummus and pita. Heather got basically the same order, it was called something else, but we couldn't tell any difference once they arrived. She got the hummus and pita though, so Connor enjoyed the hummus: 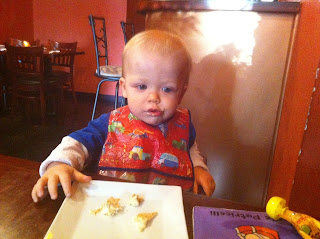 Then we posed for photos outside: 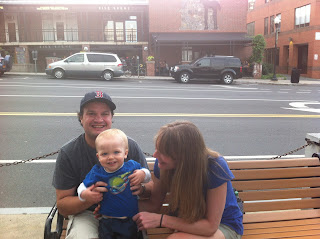 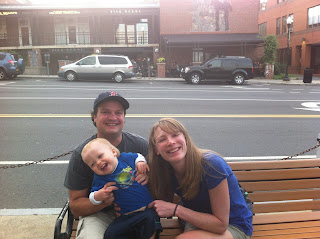 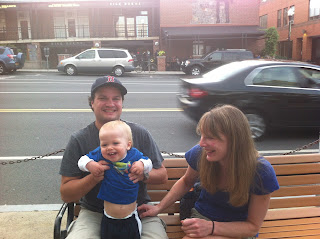 The secret to Connor smiling in those photos, is that I am tickling him. Heather was not happy about my method, because tickling is a form of torture! Here's a photo that is proof Addie's cranium is now fully formed with no harm from my poking. Also, only people with the same last name were allowed in this next photo. Sorry, Heather :( 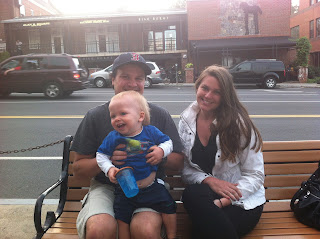 The next day, our plan was to to bike to Northampton from Amherst, get some pizza, then bike back. Connor did not cooperate. We almost got to Northampton when he had enough of sitting in the bike seat and started crying. So I left Heather and Connor at a park and went back to go get the car. I felt bad leaving them there, so I did my best Bradley Wiggins four mile time trial, though on a mountain bike with an empty child's seat, with no access to a big chainring for some reason, while yelling at hippies that I will soon be on their left.

I finished the time trial, and then picked up Heather and Connor. We got some pizza at Mimmo's, a hole-in-the-wall pizza place that we had been to before. OK, you know how I'm always saying check out the link from before, it's bluey and I made it and all of that. Well, you don't have to click on the last link, but just scroll over it to at least to check out the URL (Mom, use the thing that moves with your fingers, move that over the blue words a couple sentences ago, where it says Mimmo's, ah nevermind) Yeah, their URL is bigpizzaslices.com. They don't have a bathroom, but they have a cool URL (Mom, that means "uniform resource locator." Umh it means it's their web addresss. Ugh, the thing you type in Safari) Anyway, the URL is accurate: 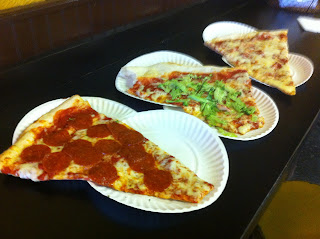 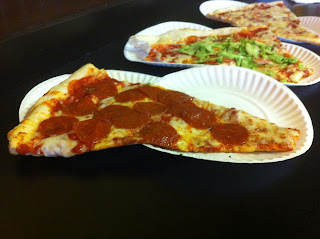 That's another angle. I got the pepperoni slice, the broccoli slice and cheese slice were for Heather and Connor. I was as surprised as you when she ordered a broccoli slice.

So we ate those slices (with some leftovers: we didn't make a 14 month old eat a two paper plate sized slice of pizza), then we drove home. Connor slept the whole drive back, like a boss.