Yeah, so Heather and I went skiing for a few days and left Connor with some gypsies. Gypsies offer very affordable child care. Well, that's what we thought, and then later we remembered we were dealing with gypsies, so we pulled him out of Gypsy Camp and left him with Grandma and Uncle instead. Do you want to see the garbage we eat on a skiing vacation, and other assorted stuff? No. Well, you're at the wrong website.

Sunday River is far away so we always stop at McDonalds on the way up there and get some McSpring Rolls: 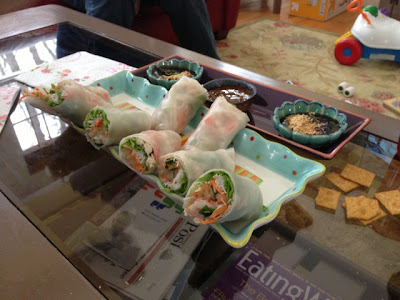 One of my favorite Aunts made those spring rolls, not McDonalds. She also made delicious chicken fingers and orzo salad (which did not contain mushrooms, though I was suspicious). I am a bad blogger, so I didn't take a picture of the chicken and orzo.

Anyway, our hotel came with a buffet breakfast. Left loose on a breakfast buffet, this is what my plate looked like: 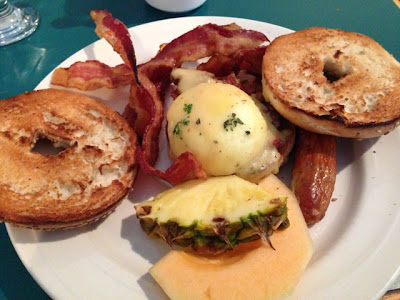 That kind of looks like a face, huh? That was not planned. I started off and toasted a bagel. I cannot resist bagels for breakfast. Then I got a heap of bacon, a sausage, and in this case I added an eggs benedict.  I added some fruit so I wouldn't seem like a savage. I am a big wimp at all-you-can eat dining places. I usually don't even finish the first plate, as was the case here. I said 'Ugh, I'm getting full" and Heather gave me a disappointed, but familiar, look. I got back at her later and took a picture of her exiting a bathroom: 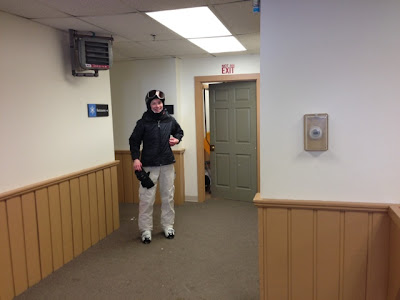 On vacation I am often bored and waiting outside a women's restroom. So I have a whole series of pictures of Heather exiting a restroom. It's my life's work.

Anyway, we went skiing and headed immediately to two of the toughest trails on the mountain.
On the second run, I had a slight fall, tried to catch myself, landed on and sprained my left wrist. Two runs later I had a similar minor fall and hurt my right shoulder. So I spent the next three days snowboarding and every run when I put on my bindings and pushed to stand up it hurt. Next time I'm sticking to the bunny slopes (that's a lie). Blurp.

Whatevs. Here's a picture of the two of us: 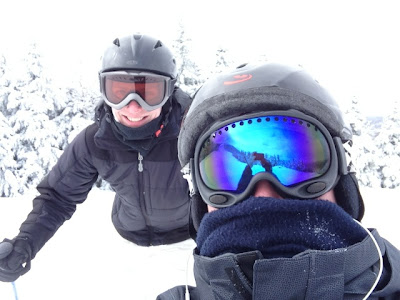 Or, I should say, here's a picture of Heather, and parts of my nose and cheeks since that is all you can see.

It was a fun day on the mountain, great weather, good snow, blah blah.

That night we went out to the Sunday River Brew Pub and we got some food which I neglected to take a picture of because, again, I am a bad blogger. I got a pulled pork plate and Heather got fish and chips. 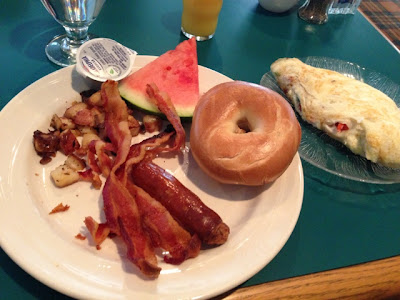 That time I hit the omelet maker, the omelet is the thing on the right. I got bacon, asparagus, peppers and cheese in my omelet. It was good but I think I came to the conclusion that omelets are never really good, no matter how much bacon you add. I guess I would prefer to just have some runny eggs and bacon on the side is what I am saying, if you care. Please don't care.

Later in that day of skiing, Heather wanted to stop at the mid-mountain lodge for a break. As we went in, she said "Hey, do you want to get something to eat?"
I said, "Yo, yo, yo, I be up for dat. I's go checks out da spread, word!" That's how I talk while snowboarding.
I came back and told her they had pizza and some salads, soups, or wraps. She said, "Oh, I don't want anything." I guess she was expecting finer delicacies on the middle of a mountain in the middle of nowhere in Maine. I then went back and got this spread: 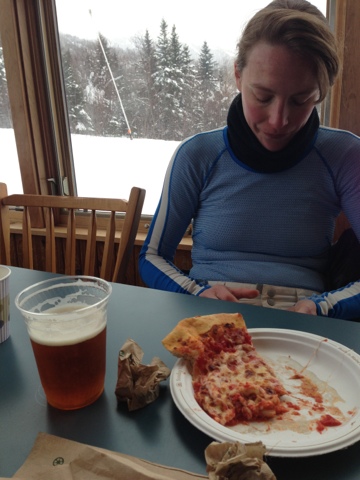 As I walked to the table she exclaimed, "Is that a beer?"
I said "Umh, does it look like anything else in the world? Of course it's a beer." I mean I said "Yo, yo, yo chillax, girl you know it's true, ooh ooh ooh, it be a beer. (I sang that last part)"
Heather then did that thing where she knows she specifically said she didn't want any food, but secretly did, and pretended to ignore the food, but then I asked if she wanted some and she ate half of the slice of pizza and drank half of the beer.

Anyway, back to snowboarding. Here's my patented snowboarding trick, I call it Jazzhands: 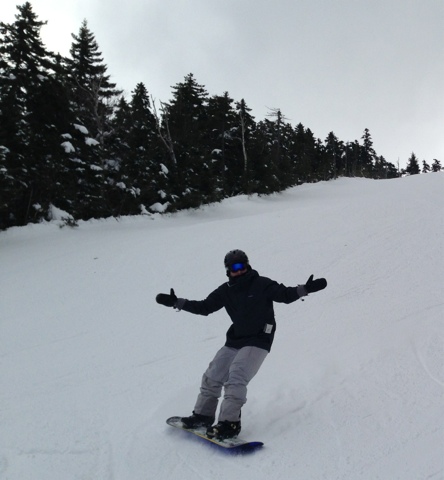 We finished skiing, and that evening we walked around bustling downtown Bethel. It was a Monday night, so you can assume that "bustling" was sarcastic. We got a slice of pizza, and I didn't take a picture, of course. If you're counting, that's pizza twice in one day. Well, might as well go for the hat trick: 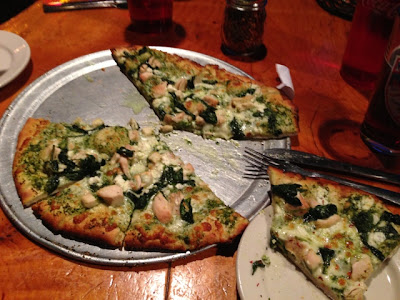 The natural pizza hat trick (that's three pizza meals in a row) was completed at the Materhorn near Sunday River. That was a chicken pesto pizza.

The next day we decided to forgo the free breakfast and just waited to go to our favorite restaurant in the area for lunch later. It's a little known place called Taco Bell/KFC: 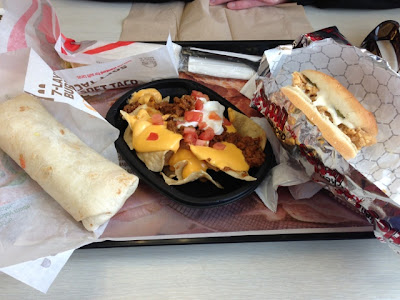 I got a Chicken Little from the KFC menu, and a seven layer burrito and meximelt from the Taco Bell menu. Heather and I also split some nachos. We skied for a few hours that morning non-stop without breakfast so we were starving when we got there.

Oh, yeah, there's a New Balance outlet on the way and we had a coupon, so we got a few pairs of sneakers: 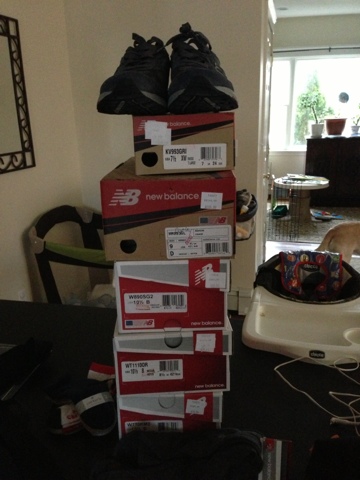 And, well, that's about it. We eat like pigs when we ski.
Posted by jeffster at 1:09 PM