Heather and I have been married for 13 years. Our first Valentine's Day once we started going steady was 18 years ago. On that first Valentine's Day, I dipped into my meager savings and bought some flowers, probably the cheapest roses available. It was probably four roses for $10 and they looked sad. I put them in the backseat of her car and went to pick her up from her work, with her car. I was a poor college student without a car is what I am saying. She got in the car and I said something like, "Yo, it would be rad to the max if you peeped in the backseat, yo." It was 1995, that's how we talked back then. She looked back, saw the roses, and screamed, "What the heck! You stupid heck! Flowers are a hecking waste of money, heckhole! " (that was edited) I haven't bought her a flower since that day, 18 years ago.

So what I am saying is my wife is awesome and really thrifty and I <3 Heather. (Heather, you see, it looks like a heart if you look at it sideways.) For the last six years we have had a romantic Valentine's Day tradition: We go to Qdoba and get some damn chain Mexican food: 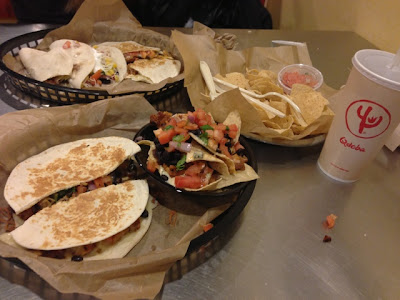 This year we got two quesadilla's, two tacos, chicken nachos, chips and salsa, and a fountain soda. Here's the bill for this feast: 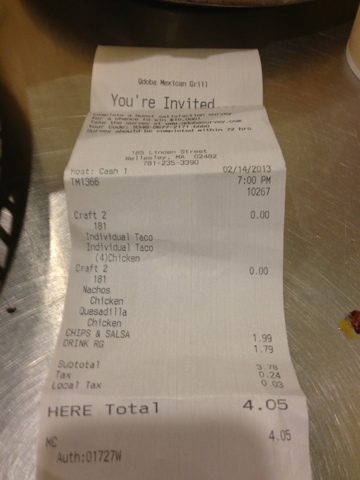 $4.05 for all of that, maybe now you might see why Heather would think it is romantic? This tradition started when I got an email in 2007 from Qdoba letting me know they had a Buy One Get One free (BOGO) coupon for Valentine's Day. I am in their reward program, obvs, and I had earned a free entree for eating 10 burritos. So Heather and I went that year, I combined the coupon and the free burrito, got nothing else, and the total bill was $0.00. Heather was impressed. We've gone every year since then, and I make a point of having a free burrito stored up when we go. One year while in line, I gave Heather my Qdoba card since she was in front of me, and she used the reward card before the BOGO coupon, like an amateur, so we had to pay for one entree that year. That year was not as romantic. I take control now. The last few years they changed it so you don't need a coupon, you just need to kiss in front of the cashier to get the BOGO. If you know us, and how much we love kissing in public, you know we really go to town in front of that poor cashier. This year we had a third wheel who kept talking about cars: 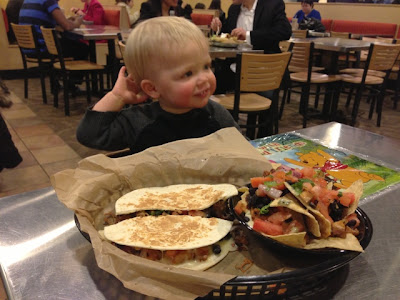 In conclusion, we had an awesome feast and got home less than an hour after setting off on our date. Yeah, it's pretty much the best Valentine's Day tradition ever.
Posted by jeffster at 3:49 PM