In my last few posts, I have started by apologizing for not blogging more often. At this point, I'm not even sure there is anyone reading this blog, but again, I'm sorry. I think the problem is I have a few draft blogs saved, and I don't like any of the topics. So when I think: "Hey, Jeff, let's go blog!", I go through the drafts and get discouraged. One draft is about sneakers. Do you really want to read about sneakers, imaginary blog reader?

Well, I think the problem is solved (Update: not solved, it took me almost two weeks to publish this stupid post) because I came up with a new feature: I analyze the Needham Times. I live in Needham. I like Needham a lot. I like the Needham Times a lot. It is informative, free, useful, free, better written than this dumb blog, and also free. So for some reason I will be making fun of a thing I like a lot that magically appears in my driveway every Thursday. What most amuses me about the Times is the lack of real news, which is not the Times' fault, Needham is pretty boring, which is why I like it. Anyway, I retrieved the magically appearing newspaper one Thursday, and this was the cover: 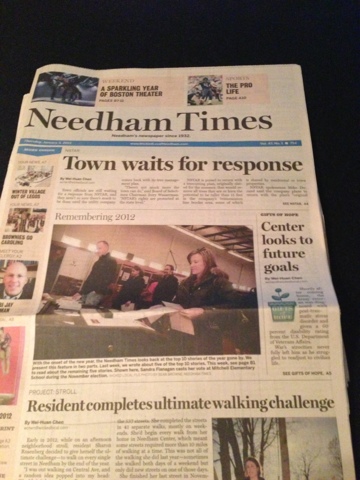 When I got it, it was in a plastic bag with some snow on it. I could only see the giant headline. I read it and thought, "WHAT RESPONSE ARE WE WAITING FOR!?!" I wiped away the snow and frantically read the rest of the story. Summary: Needham, the Town, is waiting for a response from NSTAR, the company, about the tree management plan. That's what the top story, in near "VICTORY IN EUROPE" type, was about. The Town of Needham is awaiting tree maintenance plans, and the headline teased that. Yup, big news.

Here's the next headline: "Center looks to future goals."  I think any Center in Needham is looking to future goals. Needham has lots of Centers. So, good luck whichever Center.

Then, the third headline was: "Resident completes ultimate walking challenge." But there was some sort of formatting disaster, as the headline looks like one big word, look at the picture above. So what is this UltimateWalkingChallenge? The very nice seeming walking lady (who lives really close to me, which I learned from the article) walked every single street in Needham this year. Hey, good job neighbor, that's pretty impressive. It took her 80 hours, and 10 months which is still pretty good. But if someone told me: "Hey, you can make the cover of the Needham Times if you spend 80 hours walking", I would have finished that by March (sorry, neighbor lady, if you happen to stumble upon this dumb blog.)

So before I looked at any of the front page's headlines, I flipped through to the other sections. This was the B section cover: 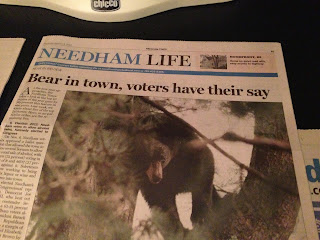 My first thought was: "ANOTHER BEAR!?!" My next thought was: "I VOTE NO BEARS!" Then I locked all the doors and shut off all the lights and got some bear repellent. By the way, bear repellent is a great way to ward off human attackers, much better than mace. I learned that by watching Doomsday Preppers. I wish I would stop learning things from Doomsday Preppers. I read more of the article about bears voting to figure out the headline, and it is the second part of a list of top Needham stories of 2012. The bear and the voters in the headline refer to different stories. It was the same bear from before. I still support the "No Bears" political platform.

That leads to the final headline from the front page: "Remembering 2012." I remember 2012! The front page has a picture of people voting. I voted in 2012! I remember that! The story is the second part of the top stories of Needham 2012, which is a year that I remember! 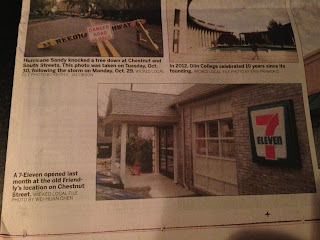 A 7-11 opening was top story #7 for Needham for 2012. Seems kind of silly, huh? Silly it isn't higher I say, right! That new 7-11 is about three blocks from my house. I was eagerly awaiting its opening. I had a goal to be the first to buy a Double Gulp at that location and share it on this stupid blog. This is a Double Gulp:


Before the new 7-11 opened Heather was jogging by it, and knowing my interest, when she saw some workers she asked when it was opening (I <3 U Heather) [Heather, that's a heart]. They told her the date of the opening. 7-11 is named that because all stores are open from at least 7am to 11pm. So 7:20am on the day it was supposed to open, I sprung out of bed, sprinted to 7-11, and was heartbroken to learn it wasn't open yet. It opened up later that day, like a soft opening, and I was probably the 27th person to buy a Double Gulp later that day. Sad end to the story, huh?

Update: At this point in this post, I started analyzing the Needham Times' top story list, and came up with my own list. This post here is already way longer than I ever expected it to be, so I decided to make the other post a separate one. I will add a link here later, if I remember (I won't remember). LINK RIGHT HERE, LOSERS!
Posted by jeffster at 12:22 PM